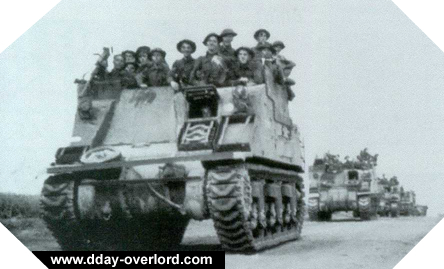 In Normandy, the troops are faced with a recurring problem: very often, the foot soldiers are separated by the armored ones who find themselves isolated, without close protection. As for the soldiers, they lose the benefit of support of the tanks. General Simonds, commanding the 2nd Canadian Corps during the 1944 Normandy campaign, then imagined re-using the 107 American M7 Priest self-propelled guns used by Canadians during their landing at Juno Beach. By transforming them so that they are able to transport infantry: the infantrymen are thus protected by armor close to the objective and benefit from a collective support weapon installed on the vehicle.

The vehicle thus modified is named Kangaroo in reference to the carrying capacity of the kangaroo with its marsupial pocket. The 105 mm gun is then removed by the allied mechanics and the opening thus created is replaced by a welded shield plate. Up to twenty equipped soldiers can board this vehicle, which is the first modern infantry fighting vehicle.

The Kangaroo saw the fire for the first time on August 8, 1944 as part of Operation Totalize, conducted by Canadian soldiers south of Caen to pierce the front in the direction of Falaise. The idea of ​​creating armored personnel carriers for combat, and not just for the front line, is being realized at this time. The Kangaroo APC (Armored Personnel Carrier) is the precursor of mechanized infantry fighting vehicles.