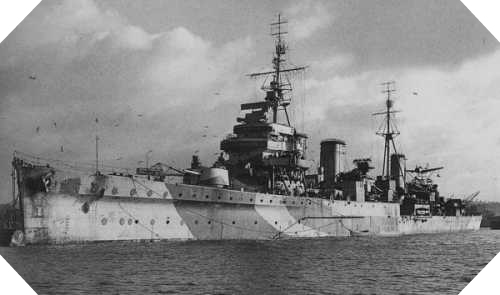 The light cruiser H.M.S. (Her Majesty Ship) Enterprise of the Emerald class was launched on June 28, 1918, five months before the end of the First World War, and entered active service as of April 7, 1926. With the 4th cruiser fleet, it is deployed in the Indian Ocean until 1938, when it is placed in reserve.

When the Second World War broke out, it patrolled in the Atlantic Ocean before being assigned to Home Fleet in April 1940. The Enterprise was involved in the Franco-British attack in Narwik, Norway, where the submarine German U65 failed to reach it. Deployed in the Mediterranean sea in June 1940 within the H force, it fired on French ships in the port of Mers-el-Kebir on 3 July (1,297 French sailors were killed during this attack).

In 1941 it served once again in the Indian Ocean and escorted many convoys in the waters where Japanese warships patrolled. Then, from December 1942 to November 1943, it was renovated in Great Britain. On December 28, 1943, engaged in Operation Stonewall in Biscay Bay, it sank the T26, a German torpedo torpedo, before being refurbished from January to March 1944.

In May 1944, the HMS Enterprise was assigned to the A-bombing force as part of Operation Neptune. On 6 June 1944 it opened fire on the German landings on the landing beach dedicated to the Americans, in particular Saint-Martin-de-Varreville, in the direction of Utah Beach.

In the days following the beginning of Operation Overlord, it participated in the fire support of Allied land forces in Normandy, notably during the encirclement of Cherbourg. Touched by the batteries defending the city (the commander and his second were wounded during the artillery duels), it had to be repaired in England before returning to bombard the batteries of Querqueville which were silenced.

9,000 152 mm shells were fired during the first days of Operation Overlord by the HMS Enterprise, resulting in two trips across the English Channel for refueling. During the first days of the Battle of Normandy, it supported the advance of the Anglo-Canadian land forces in the region of Caen before being deployed off the coast of the Netherlands.

In October 1944, HMS Enterprise was retired from active service and placed in reserve in the port of Rosyth. It was used after the war until 1946 to transport the British troops to the United Kingdom. It was finally scrapped in April 1946.