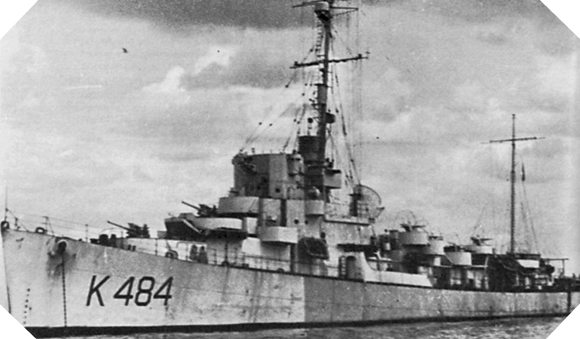 This warship was launched in the United States on 13 August 1943 and entered service on 29 October of that same year under the name DE 280. This escort destroyer was then transferred to the Royal Navy as part of the Lend-Lease program between the United States and Great Britain. Called HMS Kingsmill by the English, it also received its new technical name: K 484.

On June 6, 1944, HMS Kingsmill was the flagship of Assault Group G.2 in Task Force G heading for Gold Beach. Captain Balance’s command post was on board and its 76 mm gun has been removed for the occasion, leaving enough space for several rooms used to monitor operations and accommodate executives. In addition, four Oerlikon guns were added, bringing their total number to sixteen.

After its participation in the Allied offensive in Normandy, HMS Kingsmill was deployed in November 1944 off the Netherlands off Walcheren. It was then returned to the US Navy on August 22, 1945 before being finally sold to be scrapped on February 17, 1947.