History of the British landing at Gold Beach on D-Day 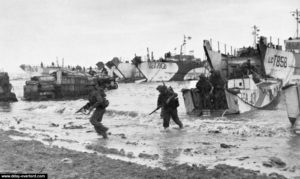 Soldiers of 47 (RM) Commando land from the landing craft (LCA) on the Jig sector of Gold Beach, while the LCT dump their cargo in the background. Photo: IWM

– Location: from Port-en-Bessin to La Rivière

Gold Beach is one of three Anglo-Canadian invasion areas. It is located 24 kilometers east of Omaha Beach.

The units that will first land on Gold Beach belong to the 50th (Northumbrian) Infantry Division and Commando No. 47 of the Royal Navy. These two units belong to the 30th British Corps (led by Lieutenant General GC Bucknall), one of the two assault corps of the 2nd Army (commanded by general Miles Dempsey).

Gold beach, located between the towns of Port-en-Bessin and La Rivière, is divided into four main sectors: “How” in the extreme west, followed to the east of “Item”, “Jig” “King”. The assault will mainly take place in the “Item”, “Jig” and “King” sectors, between Asnelles-sur-Mer and La Rivière, so as to keep the town of Arromanches intact, which will be useful during the creation and the use of a future artificial harbor that the Allies must install once the bridgehead is secured.

Gold Beach is defended by the men of the 716th German infantry division, made up of 29 companies and armed with 500 machine guns, 50 mortars and 90 guns of various calibres. Elements of the 352nd Infantry Division are also positioned west of Gold Beach.

On the night of June 5-6, 1944, many bombers crushed German positions on the Atlantic wall. Shortly after five o’clock in the morning, less than an hour before sunrise (that day at exactly 5:58 am), the naval bombardment began in its turn: it lasted two hours. 137 warships are taking part in this terrible bombardment that literally burns the coast. One of the main objectives of the Allied bombing is the German battery located near the village of Longues-sur-Mer, behind the beaches of the “Item” area of Gold Beach. It is composed of four 150 mm Tbts.K.C/36 guns under shielded mask. The four casemates that shelter these marine guns have been copiously bombed but the battery is still active at dawn.

A few minutes after sunrise, an exchange of shots takes place between the battery of Longues and the allied ships, in particular the cruiser HMS Ajax which manages to fire two shells inside two of the four casemates.

At around 6.15 am, an hour after the start of the naval bombardment, the landing craft were launched about seven kilometers off the shore and the British soldiers placed themselves there with their equipment. The crossing of this distance must last approximately one and a quarter hours according to the plan, a duration that can be reduced as the rising tide accelerates the speed of boats.

In order to facilitate the work of the sappers, frogmen are sent a few tens of minutes before the first wave, in order to clear and mark access for the landing craft.

The British, who favored the use of “funnies”, the Allied “all-purpose” tanks, first used these tanks in order to support the infantry as closely as possible and to open paths to evacuate as quickly as possible the beach.

Some of them, nicknamed “Crab“, landed among the first to open a way through the minefields. While the latter are evolving on the sand between the beach defenses, the landing craft, under the fire of German positions, approach the shore. 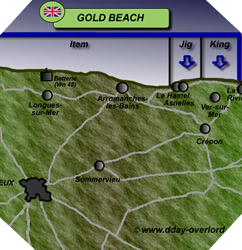 The first assault wave, made up of the men of the 1st Battalion of Royal Hampshire, 231st Brigade, reaches the beach at 07:25 and the landing craft ramps open for the British soldiers to land. The exchanges of shots are violent and many soldiers collapse on the sand, shot down by bullets or shrapnel.

To the east of the “Item” sector, in front of the village of Hamel, which is for the British the starting point of their march towards Arromanches, the Germans oppose a fierce resistance. Indeed, elements of the 352nd infantry division located on the top of a cliff to the west of Hamel pound the beach and the landing craft with an 88 mm gun. The British infantry then attacks the cliff, supported by “funnies” tanks and in particular a “Avre” (equipped with a Petard spigot mortar) which opens fire on the enemy position.

The members of commando number 47 land under heavy fire to the east of the locality of Arromanches. They then head west to capture Port-en-Bessin, where they have to make their junction with the American troops from Omaha Beach. They are greeted by a rain of projectiles giving death: of the 14 boats carrying them to the beach, 4 are destroyed by the firing of German guns or mortars.

Soon, the various German strongpoints are destroyed or controlled by the British infantry, supported by the “funnies”. The soldiers of Commando 47, wearing nearly 40 kilos of equipment, bravely head towards their targets under enemy fire. In the village of La Rivière, the 6th Battalion of the Green Howards and the 5th battalion of East Yorkshire are slowly progressing, facing fierce resistance, notably due to the presence of an 88 mm gun. Special tanks support the infantry as best they can and participate in the elimination of these various pockets of resistance.

It is around 11 am that most of the breaches are made by the sappers on Gold Beach, allowing the reinforcements to land safely and get out quickly from the beach. It is only at the beginning of the evening that commando 47 controls the heights of the town of Port-en-Bessin, 12 kilometers from their landing point.

On D-Day at 8 pm, a bold armored reconnaissance led by elements of the 21. Panzer-Division manages to infiltrate until Luc-sur-Mer before retreating towards the Caen sector.

Results of the Gold Beach landing

On the evening of June 6, 1944 on Gold Beach, the 50th Infantry Division and Commando No. 47 defend a bridgehead nearly 10 kilometers deep by 10 kilometers wide. 400 British soldiers were killed, wounded, taken prisoner or missing in the shock of the initial assault.

24,970 British soldiers land on Gold Beach on June 6, 1944 at midnight. They are at the gates of Bayeux and have reached the Caen-Bayeux road, thus considerably impeding the movements of the German reinforcements.