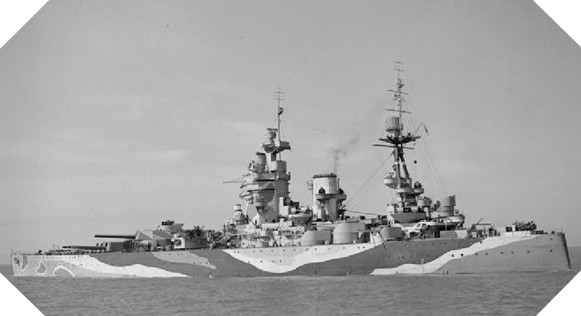 The battleship 29 H.M.S. (Her Majesty Ship) Rodney was launched on December 17, 1925 and entered service on November 10, 1927. Affected in the Atlantic and along the British coasts, it was damaged on 9 April 1940 near Stavanger by the fall of a Bomb dropped by a German plane but did not explode. After repairs, it patrolled the Channel before being deployed in the Atlantic to escort many convoys.

From 24 May 1941 it took part in the hunting of the German Bismarck warship which it engaged at the dawn of 27 May. It is repaired and modernized in the United States even though the Americans have not yet entered the war.

Deployed in the Mediterranean from September 1941, it participated in Operation Torch in North Africa, the landing of Sicily (Operation Husky) and Operation Avalanche in front of Salerno. In October 1943, it returned to the English Channel and began preparing for its participation in Operation Neptune.

On 6 June 1944, off Sword Beach, it bombarded the battery of Bénerville as well as several German positions in the region of Caen. The day after D-Day, the Rodney collided with the Landing Craft Tank (LCT) 427, resulting in the death of 13 British sailors. Despite this, it  continued his mission and supported the Allied land forces during the continuation of the Battle of Normandy, notably in the area of Carpiquet and Caen, causing great destruction such as the arrow of the Saint-Pierre church.

After Normandy, it continued his escort missions, especially in the North Sea. But, subject to major problems related to the intense use of its engines, it became as of December 1944 the flagship of Home Fleet along the British coasts. Very little used by the Royal Navy, it is finally scrapped as of March 26, 1948.