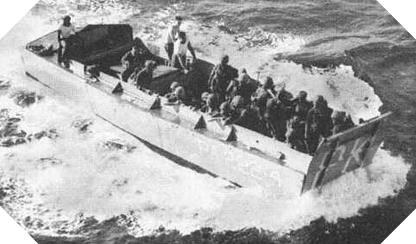 This ship is imagined in pure logic of expeditionary force. Designed to carry around 30 equipped soldiers or a light vehicle (Jeep type) and 12 infantrymen with their equipment, the LCVP quickly becomes the most present element during amphibious operations and especially during landings.

This flat-bottomed barge is capable of reaching 12 knots, and its structure allows it to make very rapid trajectory changes.

During the Normandy disembarkation, US forces are mainly equipped with LCVPs, which are more maneuverable and better suited to an amphibious assault than some larger and slower boats such as the LCA (Landing Craft Assault).