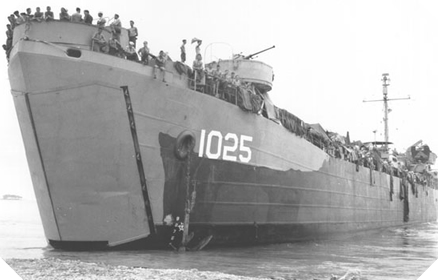 The LST (Landing Ship Tank) was designed during the Second World War and began in November 1941 to allow the Allied forces to land as much heavy equipment as possible without having port facilities.

The LST was first used during the Torch amphibious operation in 1942 in North Africa. The use and efficiency reports are very conclusive, so the Allies decided to re-use the Landing Ship Tank in their amphibious operations in Sicily, Normandy and Operation Dragoon in French Provence. It is quickly nicknamed the “Large Slow Target” by the American soldiers.

At the end of the Second World War, in 1945, the Allies needed only two months to build an LST. The Landing Ship Tank, Mk2 were used until the 1960s and also participate in the Korean War.

The last LST was removed from service in 2002.