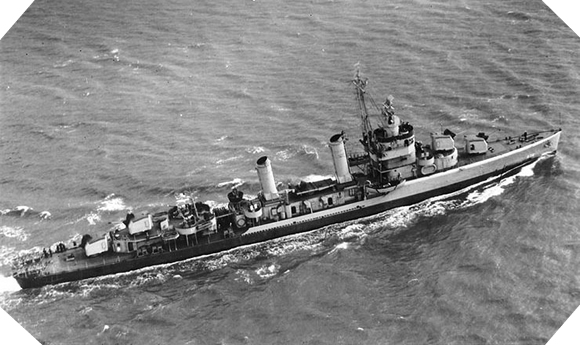 The USS Butler destroyer was launched on 12 February 1942 and entered service on 15 August of the same year. Its first missions took place in the Gulf of Mexico and in the Atlantic Ocean where it escorted convoys.

In June, it was deployed in the Mediterranean Sea where it participated in amphibious operations during the Sicilian landing (Operation Husky), from 9 July to 12 August. After a passage by the United States, the USS Butler participated in the operation Neptune in the English Channel and bombard the German positions on June 6, 1944 off Utah Beach. It participated in the USS Corry destroyer relief mission, which was sunk in the early hours of D-Day.

On July 15, it left the area to join the Mediterranean Sea in order to participate in the landing in Provence.

On October 27, USS Butler returned to the United States to undergo a major transformation, being transformed into a rapid mine sweeper on December 21. At the beginning of 1945, it was deployed in the Pacific and took part in the Okinawa attack from March to May. On May 25, a Japanese suicide bomber touched the Butler, killing nine crew members and causing it severe damage.

Repaired, it returned to the United States on 26 August and was placed in reserve on 8 November. It was demolished on January 10, 1948.