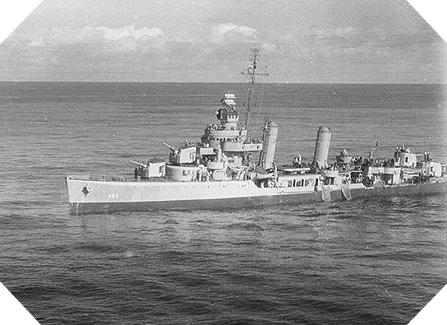 The USS Corry destroyer was launched on 28 July 1941 and entered service on 18 December of the same year. Its first missions took place in the Caribbean Sea and in the Atlantic Ocean where it escorted convoys.

Deployed in the Mediterranean Sea from October 1942 to participate in Operation Torch in North Africa, it then patrolled in Scandinavia and off Iceland before resuming escort missions in the Gulf of Mexico and in the Atlantic where it captured many German submarine crew members.

On April 20, 1944, USS Corry left Norfolk and headed for Plymouth to participate in Operation Neptune. On June 6, 1944, it anchored off Utah Beach, near the Saint-Marcouf Islands. Shortly before dawn, it bombarded the German batteries when the plane charged with scattering a screen of smoke to protect the warships around the islands of Saint-Marcouf was shot down by the anti-aircraft defense. The Germans, with a good visual on the destroyer, began targeting him. At the exact moment of the landing on Utah, at 6.33 am, shells hit him directly below the surface of the water at the keel and it began to sink.

As the rudder was blocked to the right by the shot, the Corry became uncontrollable and the water rushed into the engine room. The German batteries, and in particular those of Crisbecq (2.8 kilometers inland) and Azeville concentrate their shots on the destroyer in perdition. One of these shells hit the 40 mm gun barrel and exploded the nearby ammunition dump. At 6:40 am the ship’s commander, George Dewey Hoffman, gave the evacuation order.

While the USS Corry was sinking, survivors boarded lifeboats under the enemy fire or left the area to swim in a 12-degree water. A German shell felt near one of these boats projecting it to several meters of heights. When the German batteries were silenced, relief efforts could finally arrive two hours after the start of the drama: the USS Fitch, USS Hobson and USS Butler destroyers, as well as the PT-199, came to help. 24 crew members died, 60 were wounded.

The official version reports that the Corry struck an underwater mine which is the cause of the sinking, and that German fire caused only “partial” damage. However, it is not the opinion of the commander of the American destroyer, nor that of commander of the German battery of Crisbecq, Oberleutenant (lieutenant) Walter Ohmsen, who wrote on his notebook of events to have hit a warship at around 6:30 am on D-Day, causing it to sink.

The Corry wreck touched the bottom at a depth of 9.1 meters. It still rests there, off Quineville, scrapped partly after the war.