Inauguration of the monument dedicated to Joseph T. Cagney

The monument inaugurated on July 29, 2019 at a place called Le Coton in Cerisy-la-Salle, which shape is inspired by an airplane wing and on which is affixed the plaque in memory of Joseph T. Cagney.
Photo: Mr. Heissler

75 years to the day after the death on mission of the American pilot Joseph T. Cagney, a monument was inaugurated in his memory on the commune of Cerisy-la-Salle. A ceremony, organized by the association D-Day Overlord and the municipality of Cerisy-la-Salle, was held this afternoon in the presence of the family.

75 years ago, on Saturday, July 29, 1944, the Battle of Normandy was still in full swing, more than seven weeks after the start of the D-Day. The Americans continued to exploit Operation Cobra, which had begun four days earlier, disrupting German forces south of the Cotentin River more than thirteen kilometers from the starting line. In the Caen area, Anglo-Canadian forces are setting enemy armored units at heavy losses to lighten the front to the west and facilitate the US breakthrough.

On this video of the time (probably filmed at Carentan on ALG A-10 airfield), the P-47 in the background carries the white stripes of recognition corresponding to the period of the battle of Normandy and the code T5 which corresponds 10th Fighter Squadron of the 50th Fighter Group, Joe Cagney’s unit.
Video: US National Archives

On July 29, 1944, the Americans of the Combat Group “A” of the 3rd Armored Division reached the village of Cerisy-la-Salle, abandoned the day before by the defenders, in favor of the night. In the air, they are supported by squadrons of fighter-bombers, taking off from different aerodromes. Joseph Thomas Cagney, nicknamed “Joe,” was one of those pilots. In the late morning of July 29, “Joe” took off from Carentan’s Advanced Aerodrome (ALG A-10) aboard his P-47 Thunderbolt fighter-bomber, named “Gallopin Gertie”. With three of his brothers in arms, they support from the air fighters in the area of ​​Saint-Denis-le-Gast before turning back to their starting point to refuel. Along the way, they are caught under the fire of a German anti-aircraft battery.

Hit on the spot or believing until the end his chance to master a makeshift landing, he crashed in the town of Cerisy-la-Salle, near the locality Le Coton.

Born January 20, 1921, Joseph T. Cagney was originally from Chicago and had the soul of an artist. Before the war he had graduated from the prestigious Art Institute of Chicago and had found his way into painting. But in 1942, only weeks after the Japanese attack on Pearl Harbor and the US entry into the war, he volunteered to join the US Army Air Force. Appointed to serve with the 10th Fighter Squadron (50th fighter Group), he arrived in Normandy at the end of June before knowing his fate.

Due to administrative difficulties, the body of “Joe” has never been repatriated to the United States, contrary to the wishes of his parents. The latter had prepared a place in the family vault, but it remained empty. 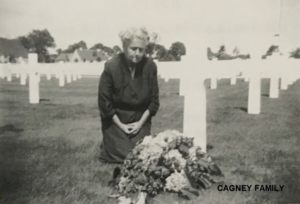 Exactly 75 years later after the crash, on July 29, 2019, Mathias Heissler wished to pay tribute to this young driver who died at the age of twenty-three. Passionate about aviation and the Second World War, Mathias has gathered a lot of information about “Joe” Cagney and has been in regular contact with his family for several months. He moved closer to the D-Day Overlord association and the town of Cerisy-la-Salle to support his homage project. A stele was erected a few meters from the exact location of the crash, surmounted by a plaque reminding the ultimate sacrifice of a discreet American hero. 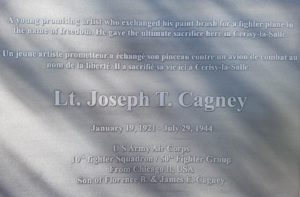 Detail of the monument and plaque, inaugurated on 29 July 2019 in Cerisy-la-Salle.
Photo: D-Day Overlord

Joseph’s family made the trip to Europe for the occasion, and was given original pieces of the P-47 Thunderbolt found at the scene of the crash. The parts of the plane, offered by Alexandre Besnard, will be buried in the family vault, at the site originally intended to accommodate the missing child.

In gratitude for this tribute in memory of “Joe”, made on the occasion of the 75th anniversary of the Normandy landings and the Battle of Normandy, the family, in turn, offered a precious souvenir to the inhabitants of Cerisy-la-Salle: one of the rare paintings painted by Joseph before the war. This canvas, living testimony of the lost soldier, now inspires us to remember the price of freedom. 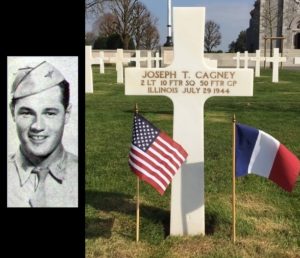