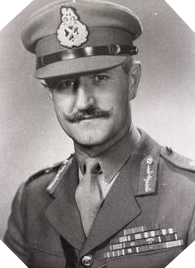 George Kitching was born in 1910 in Guangzhou, China. Like most senior Canadian officers, he continued his military training in England, including the Royal Military College Sandhurst, and then served in the British Army.

George Kitching returned to the Canadian Army in 1939 when World War II broke out. A Class 1 General Staff Officer in the 1st Canadian Infantry Division until 1943, he served in the 5th Armored Division. In Italy, participates in the Battle of Ortona at the head of the 11th Infantry Brigade.

Called back to England in February 1944, he took command of the 4th Canadian Armored Division (AD) and began preparations for Operation Overlord in Normandy. Deployed on the other side of the Channel at the end of July, Kitching is one of the youngest generals of his generation engaged in the Normandy countryside. After a period when the front has changed very little, the Anglo-Canadians break through the German lines of defense after the liberation of Caen and the 4th AD is engaged in August 1944 in operations Totalize and Tractable and in the pocket of Falaise which rings the death knell of the German armed forces in Normandy.

Nevertheless, the closure of the Falaise pocket was carried out later than expected and many German soldiers and vehicles were able to escape the trap that closed on them. One of the reasons would be for the Allies the slow progress of the Canadian south: Kitching is relieved of his command.

Returning to the general staff, he was appointed Brigadier-General to the 1st Canadian Corps on November 12, 1944 (where he played a key role in the surrender of German forces in Holland) and then second in command of the General Staff of the 1st body until the end of the war.

George Kitching resides in the military and holds various positions, including commanding the 2nd Canadian Brigade, commanding Camp Wainwright, or staff officer in London before retiring in 1965.

He died in 1999 in Victoria. His memoirs were published in 1993 under the title Mud and Green Fields: The Memoirs of Major-General George Kitching.

Back to the Canadian military personnel biographies menu