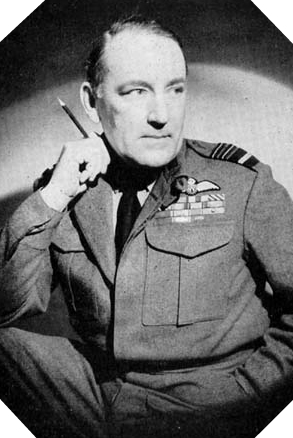 Arthur Coningham was born on January 19, 1895 in Brisbane, Australia. While still a child, his father is forced to move with his family to New Zealand following the scandal of a lost trial. On the spot, he is jailed for six months for once again fabricating false evidence in a new trial. It is in these particular circumstances that the young Arthur Coningham succeeds in joining Wellington College where he studies. His personality is distinguished by his autonomy, his taste for sport (including horse riding) and his righteousness, as to restore the family coat of arms.

When World War I broke out, he joined the army and served with the New Zealand Expeditionary Force. After a time of service that leads him to Egypt, he suffers from typhoid fever which renders him unfit for the profession of arms. But Coningham clings and he decides to travel to England to join the Royal Flying Corp., precursor of the Royal Air Force. After his classes, he was deployed on the front in France and recorded his first victory in flight in 1917. Several others follow. During this period, this ace of aviation is nicknamed “Maori”, thus marking his New Zealand origin. Over time, this nickname gradually turns into “Mary”.

After the war, he remained pilot and kept the command of No. 92 Squadron. Several appointments to different positions follow, such as that of instructor in Iraq, commander of No. 55 Squadron or attending officer at the Royal Air Force headquarters in the Middle East. From 1937 to 1939 he commanded Calshot Air Force Base in England.

The Second World War led him to command the Bomber Command’s No. 4 Group, which carried out a series of bombings on German territory. Once again deployed in the Middle East, he took command of the Western Desert Air Force, the British Air Force in North Africa and the Middle East.

He imagines and develops aerial tactics (massively developing the carpet of bombs or “carpet bombing”) adapted to these particular territories as well as to the difficulties of the joint armies, thus participating in the allied success of the battle of El Alamein. Its principles of joint coordination and concentration of resources are bearing fruit on the battlefields of North Africa, so much so that they are adopted by the air forces of the various allied countries.

At the end of 1943, Arthur Coningham was promoted to Air Marshal. He was appointed 1st Allied Tactical Air Force (Tactical Allied Tactical Command) and directed air operations during Operation Husky. in Sicily then those in Italy.

Like the Air Marshal Arthur Tedder, the experience acquired during this period in the field of preparation of air operations earned him the appointment of the head of the Allied Air Forces operating in Western Europe. and gathered in the 2nd Tactical Air Force. His experience is particularly beneficial as part of the preparation for the Normandy invasion, Operation Overlord.

Like many Allied Air Force officers, Coningham has bad relations with General Montgomery who command the Allied Ground Forces in Normandy. Despite these internal tensions within the Allied Staff, he remains at the head of the 2nd Tactical Air Force for the duration of the Battle of Normandy and all the rest of the war in Europe, leaving his post only in July 1945 to take command of the flight training command, the Flying Training Command.

He left the army on August 1, 1947 after thirty years of loyal service. Less than a year later, on the night of January 29 to 30, 1948, the airliner (G-AHNP Star Tiger) that transports it to Bermuda disappears at sea for some unknown reason. No passengers or any trace of the plane are found in this famous “Bermuda Triangle”. Arthur Coningham was fifty-three years old.