Bretteville-l’Orgueilleuse in 1944 – Calvados – Battle of Normandy

On June 7, 1944, the Regina Rifles Regiment (commanded by Lieutenant-Colonel F. M. Matheson), belonging to the 7th Brigade of the 3rd Canadian Infantry Division, seized Bretteville-l’Orgueilleuse without fighting. This locality is a lock that allows to control a part of the national road 13 which connects Caen with Bayeux.

On the same day, the Germans led by S.S. Panzergrenadierregiment 25 (S.S. Pz.Gren.Rgt 25.) led by S.S. Standartenführer Kurt Meyer and belonging to the 12th S.S. Panzer-Division Hitlerjugend counterattack from Caen towards the beaches. Surprised by the speed and destructive power of this counter-offensive, the Allies set themselves up in defensive in this sector and plan to fix the adversary to destroy it with their support. But the Germans jostled the Canadians at Norrey-en-Bessin, south of Bretteville-l’Orgueilleuse.

On the night of 8-9 June 1944, 23 Panther tanks of the 3rd Panzerkompanie of the 1st Battalion (commanded by the SS-Sturmbannführer Arnold Jürgensen) of the SS Panzerregiment 12 (commanded by SS-Standartenführer Max Wünsche) Rots towards Bretteville-l’Orgueilleuse and Norrey-en-Bessin. Company D (commanded by Major Gordon Brown) of the Regina Rifles Regiment who is in the front line does not bend despite the power of the attack and manages to destroy several opposing tanks. One of them, a Panther V, is destroyed by the P.I.A.T. rocket launcher  by Joe Lapointe east of the village. The battle is particularly violent. In the impossibility of regaining Bretteville-l’Orgueilleuse, the S.S. retreated at the dawn of 9 June 1944 to Rots to reorganize.

Major Brown’s men are exhausted; 51 of them are put out of action in the only night of 8 to 9 June. But the losses inflicted on the Germans are also severe and they are no longer able to launch a counter-offensive of the same magnitude in the days that follow.

The commune of Bretteville-l’Orgueilleuse is strengthened by the Queen’s Own Rifles of Canada belonging to the 8th Brigade and the fighting continues to the south and southwest of this town, the Germans wanting to control the access to The national road linking Bayeux to Caen. On June 23, 1944, a German artillery fire destroyed the Regina Rifles Regiment command post in the center of the town. 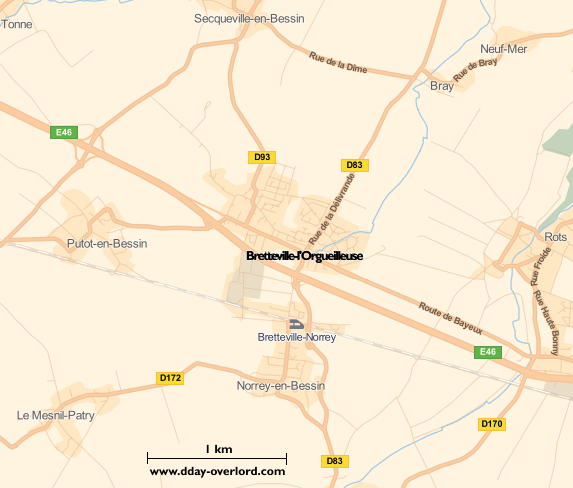