Cintheaux in 1944 – Calvados – Battle of Normandy

The six weeks of the siege of the city of Caen allow the German forces to fortify the defenses of many towns to the south, and Cintheaux is one of them. In order to penetrate this enemy front in the direction of Falaise, the British trigger Operation Totalize on the night of August 7 to 8, 1944, which starts with aerial and land bombardments. Cintheaux was then defended by the German armored vehicles of the 12th SS Panzer Division and the Schwere SS Panzer-Abteilung 101.

Shattered by the bombing, some of the tanks are retreating into Cintheaux, which houses the command post of the SS Panzer-Division “Hitlerjugend”. The progression of Canadians belonging to the 29th Armored Reconnaissance Regiment The South Alberta Regiment (4th Armored Division) was rapid in the early stages of the offensive until the late morning counter-attack of the Schwere SS Panzer-Abteilung 101 (SS-Pz.-Abt. 101). This counter-offensive forces the Allies to use their artillery and air superiority to disrupt the enemy and some German tanks find themselves isolated in the north of the bombed area from where they fight relentlessly. At 12.30 hours, S.S.-Hauptsturmführer Michael Wittmann commanding the 2nd squadron of sSS-Pz.-Abt. 101 is engaged in the area of ​​Cintheaux. Towards 12.47, he died in his tank Tiger 007. At 12.55, the SS-Hauptscharführer Höflinger reported that it was to the right of the tank commanded by Wittmann, Field located near the national road 158 Caen-Cintheaux when the tank of Michael Wittmann is destroyed. All of its occupants are killed on the spot. After further exchanges of fire, Wittmann’s body and those of his crew are buried beside the carcass of the tank. The causes of his death remain unexplained and several different units claim the blow to the goal.

Canadian reconnaissance tanks reach the outskirts of Cintheaux in the late afternoon and are followed by the British Infantry (2nd Battalion The Argyll and Sutherland Highlanders, 227th Infantry Brigade, 15th Infantry Division). The Allies managed to capture the village around 6 pm, pushing their opponents to the south.

Also to the north of the commune of Cintheaux is today a Commonwealth military cemetery which collects the remains of 2,958 soldiers. In detail, 2,872 Canadians, 80 British, 4 Australians, 1 French and 1 New Zealander rest there. 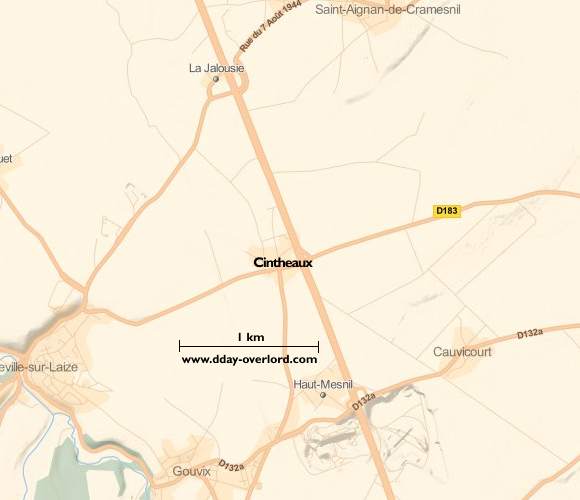