History of the Jedburghs in Normandy – French resistance

French Resistance during the Battle of Normandy 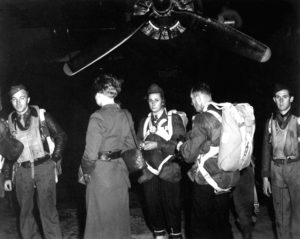 A Jedburgh team and the crew of a B-24 bomber before departing on a mission to France in 1944 from Harrington Airfield, in England.
Photo: US National Archives

The purpose of the Jedburgh Operations is to coordinate French resistance actions with the allied strategic and tactical plans of the Supreme Headquarters Allied Expeditionary Force in order to slow down German forces during the Normandy landing. This will be done by air dropping equipment and personnel belonging to the Special Operations Executive (SOE), the Office of Strategic Services (OSS) and the Free France Central Bureau of Intelligence and Action (BCRA) to local French resistance networks.

The British, experts in commando operations, initiated the project at Fall 1943 and began the selection of hand-picked cadres from the Special Air Service (SAS). With an excellent physical condition, these volunteers must be determined and accept to endure multiple tests while perfecting their technical skills. Colonel Wilkinson of the S.O.E. gave the code name “Jedburgh” to these small teams trained to work alone and deep into enemy territory. The term “Jedburgh” comes from the name of a town located on the Scottish border, near which many exercises were organized like “Spartan”, the first training setting the bases of the general concept of these operations.

A Jedburgh team is composed of three personnel: the chief (an American or British officer), his deputy (an officer of the country where the team is deployed) and a radio operator. They are particularly well equipped, as shown in the list of material available on this page.

The Jedburgh command was established at the beginning of 1944 at the Special Forces Headquarters (SFHQ) in Baker Street, London, and the first Jedburgh operation was carried out on the night of June 4 to 5, 1944 in Châteauroux, France, as part of the preparation for Operation Overlord.

The mission of these teams is to get in touch with local resistance networks in enemy territory to inform them of Allied actions, to prepare supplies of weapons, ammunition and other equipment and to install a communication network. The Jedburghs must also carry out a summary brieffing with the equipment delivered such as weapons and explosives. They are able, if necessary, to take command of the local resistance units.

During the Battle of Normandy and following operations of the liberation of France, 93 teams were deployed in total on French territory from June to December 1944. Other units were engaged in Southeast Asia in 1945, in particular Sixty French teams in French Indochina, then occupied by the Japanese forces. British commandos were also deployed in Burma in February 1945 (as part of Operation Billet and Operation Character).