History of operation Samwest in June 1944 in Britanny 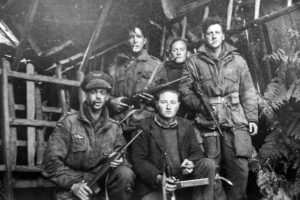 Resistant and French SAS on June 20, 1944 at the maquis of Saint-Marcel in Brittany.
Photo: DR

In order to coordinate the actions of the Breton resistance while disorganizing the arrival of the German reinforcements to Normandy after D-Day, French commandos were parachuted over Brittany. One of these operations, code-named Dingson, consisted in setting up a solid secret army in the south of Brittany in the Morbihan, in order to establish allied drop zones and landing zones in coordination with the resistance networks.

In the early hours of June 6, 1944, while the American and British scouts jumped over Normandy, 36 commandos belonging to the 4th Special Air Service (SAS) French Battalion (future 2nd régiment de chasseurs parachutistes) were dropper over Brittany. They were divided into four teams of nine personnel each: two (commanded by Lieutenants Deschamps and Botella) jumped around the forest of Duault in the Côtes-d’Armor (Operation Samwest) around 12:30 am and two dropped near Plumelec in the Morbihan region (Operation Dingson).

Composition of the two sticks of Operation Samwest:

The first phase of the mission was to establish a secret support base in Brittany near Saint-Brieuc, to come into contact with the local Resistance which would be integrated into the guerrilla operations, and finally to establish drop zones and landing zones for the rest of the commandos.

This battalion was then to carry out destructions of lines of communication, ambushes and sabotage actions to hinder the convoys of German reinforcements circulating in Brittany and heading towards Normandy after D-Day.

Until June 9, 1944, 116 French SAS were dropped over the Samwest secret base. Survivors of the Samwest cell reinforced the Dingson cell to coordinate their actions. On June 18, 1944, a German attack disrupted the resistance fighters who were severely affected (nearly 30 were killed that day). Captain Leblond was then in charge of collecting the survivors and training new recruits during operation Grog starting on June 19, 1944.