French Resistance during the Battle of Normandy 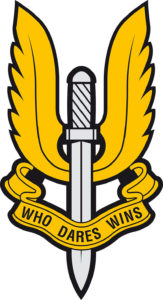 The badge of the SAS: the Excalibur sword haloed with flames.
Image: DR

The origin of the S.A.S.

The Special Air Service (S.A.S.) was founded at the end of 1941 at the initiative of Lieutenant David Stirling. It gathers parachute volunteers to form a special forces unit operating on the commando model. This model was essentially developped by the British who established its principles: it is composed of small teams of three to a dozen soldiers, very well equipped, who carry out punctual actions in enemy territory, as well as the destruction of high value objectives.

Training of S.A.S units is particularly challenging and volunteers must demonstrate excellent physical and mental resistance. They are taught in a wide variety of domains and have both knowledges in explosives and armaments. Click here to discover the list of equipment for the S.A.S.

From North Africa to Normandy

The first combat experience of the S.A.S. soldiers took place in North Africa in 1942. They carried out assaults against Afrika Korps forces and where reinforced by French volunteers of the 1st company of Parachutists. Back to England, the units of the S.A.S. were organized in order to participate in the auxiliary operations of the landing in Normandy. These forces are composed of the 1st and 2nd British S.A.S regiments, the 3rd and 4th French S.A.S. regiments as well as the 5th Belgian S.A.S. regiment. Teams with smaller staff (three personnel) form the “Jedburgh” units: they are responsible for coordinating missions between the Allies and the local resistance.

These ancillary operations are important in the context of Overlord. Their aim was to disrupt and slow down the advance of German reinforcements towards Normandy so that the Allies ensured the consolidation of their bridgehead in the days and weeks following June 6, 1944.

The first Jedburghs were employed as early as 5 June 1944 in the Chateauroux region (France) where they came into contact with the local resistance. 35 paratroopers belonging to the 4th French SAS and led by Colonel Bourgoin were dropped over Brittany on the night of June 5-6: their mission was to create two bases fueled by the French resistance, one in the Côte-d’Armor region (operation Dingson) and the other in the Morbihan region (operation Samwest). At the same time, British commandos were parachuted on the Morvan region (Operation Houndsworth) and on the Vienna region (Operation Bulbasket).

Isolated, sometimes betrayed by local forces, the S.A.S. payed a heavy tribe during their engagement on French territory. Of the 450 S.A.S. engaged in Britain, 77 were killed and 197 wounded. When the Battle of Normandy ended at the end of August 1944, nearly 1,100 S.A.S were deployed on French soil. The 3rd British S.A.S. Regiment then operated in Finistère, Limousin, Saône-et-Loire and Vendée areas.

These special forces were also deployed in the Ardennes region at the end of 1944 as part of Operation Franklin and then in Holland.