Operation Gambit during the Normandy landings 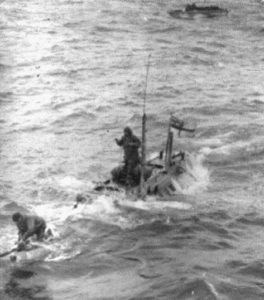 Operation Gambit: Crossing the Channel by two midget submarines of the Royal Navy from June 4th to 6th, 1944.
Photo: IWM

For a handful of British Royal Navy sailors, Operation Overlord has already begun as early as June 2, 1944 at 9:30 pm in England: two “X” class submarines (the X20 commanded by Lieutenant Kenneth Hudspeth and X23 at the orders of Lieutenant George Honor) cast off after being towed by two trawlers, Darthema and Sapper. This is the triggering of the operation called “Gambit”. Both crews consist of five men each. Their mission is to mark the access routes of the Allied Armada. As they leave England, the Allied Amphibious Airborne Assault is scheduled to begin June 5, 1944.
The Americans, for their part, did not wish to organize equivalent missions for their own area of responsibility.

The two submarines are 20 miles from the occupied French coast as of June 4, 1944 at noon. Distances of 20 miles from each other, they temporarily surface to observe the shoreline facing Sword Beach (Colleville-sur-Orne – now Colleville-Montgomery) and Juno Beach (Courseulles-sur-Mer and Bernières-sur-Mer). When night falls, starting at 9:30 pm, they begin recognizing the buoyage zones, believing that the Allied armada will arrive during the night, in accordance with the initial plans. They are preparing to drop a series of light beacons, without trying to save themselves.

The device they are equipped with consists of several telescopic rods surmounted by a lamp flash green, a total length of 5.5 meters, visible up to about eight kilometers. These tags are manually installed, crew members putting them in place using their diving gear. The duration of the batteries being limited, these beacons must be operated on order, on receipt of the “Padfoot” code word. For this purpose, the two submarines are equipped with radios whose frequencies must be constantly monitored. 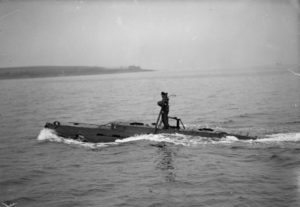 An “X” class submarine during trials in the United Kingdom in Loch Striven, near Rothesa. Photo: IWM A 22903

But the capricious weather delays the twenty-four-hour Overlord operation. Warned the radio report on June 5, 1944 about one o’clock in the morning, thanks to a radio code transmitted by the BBC, the British submariners must take their trouble one more day and night, hoping that this delay is not not prolonged again. They land at the bottom of the sea and begin their long wait. But the conditions do not allow them to rest fully: the cramped space of the submarines (about 5 square meters), promiscuity and smells are parameters that increase the level of difficulty of the mission, in addition to fatigue that accumulate.

When the day falls on June 5, 1944, they reach the surface and resume radio listening. Towards one o’clock in the morning, Tuesday, June 6, 1944, they observe the armada allied whose engine noise is heard for miles. The dark masses of ships stand out clearly on the horizon. At 4:45, while the brightness is becoming stronger, the submariners capture the message “padfoot” as expected. They immediately set to work and complete their mission at around 5:20. For fear of being targeted by the Allied armada, Lieutenant George Honor installs a huge Royal Navy flag on the structure of his submarine in order to be recognized by his own warships.

In the late afternoon of D-Day, the two submarines reach the open sea and meet with rescue the two trawlers, fleeing with more fear than harm a passage in the middle of the imposing Allied fleet. Embarked on board the boats, they abandon the submarines that are towed to England. They spent almost ninety-six hours in this enclosed space. The discreet heroes of the Normandy landings, they nonetheless played a leading role for the Allied Navy during Operation Neptune, informing and guiding the allied ships of Juno and Sword to their objectives.

Back to the Channel crossing menu