Preliminary missions for the Operation Overlord

Photograph of the Landing Ship Tank (LST) 289, damaged by a German torpedo during exercise “Operation Tiger”.
Photo: US National Archives.

On the night of 27-28 April 1944, less than two months before the date scheduled for D-Day (initially on 5 June 1944), a life-size rehearsal of the landing (codenamed “Tiger” by the Allies) is performed on the beaches of the south coast of England, at Slapton Sands in Devonshire. These beaches are very similar to those of Utah and Omaha, both by the topography and by the very quality of the sand. 30,000 soldiers (in addition to the 500 American “adversary forces”, fictitiously responsible for defending the coastline) and nearly 300 warships are mobilized for the occasion.

Capturing the allied radio networks, whose intensity could not go unnoticed, the Germans decide to send patrol no less than nine speedboats from Cherbourg. Taking advantage of heavy fog, German torpedo boats belonging to the 17th Squadron attacked a convoy of troop transports type L.S.T. This convoy, consisting of eight ships and spread over a distance of about eight kilometers, was initially escorted by only two warships, the H.M.S. Scimitar and the corvette Azalea. But shortly after the departure, the Scimitar was obliged to remain at the port following a collision which cost him major repairs (the staff is not informed of this event). In addition, Azalea corvette radios are not tuned to the correct frequency.

The first attack is a failure, with no torpedoes reaching its target. But after a second pass, two L.S.T are sunk (the 507 and the 531) while another one, the 289, is severely damaged.

In order not to add to the disorder, the British, who spot the attack, do not intentionally signal the S-Boote stars to the Americans so that they do not risk to shoot theirs. Nevertheless, without aid, many soldiers are condemned to perish drowned, stranded in their ship or lost in the cold water of the English Channel. It is only at dawn that Eisenhower gives the order to start the searches and to save those that can still be.

A total of 749 Allied soldiers (198 seamen and 551 infantrymen) lose their lives in a quarter of an hour and countless missing. 500 soldiers are also injured. Many soldiers had not yet received instruction on the use of lifejackets, not yet widely known, the famous Mae West. 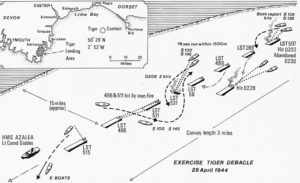 The Secret of D-Day threatened

The families of the victims subsequently received death announcements without any explanation: the staffs silence this immense fiasco. Direct witnesses are threatened with court martial if they tell what has just happened. For the Allied generals, the time is all the more serious that ten American and British Bigot officers, engaged on board the ships attacked, had maps of Utah Beach in Normandy.

When a commission of inquiry was set up by Montgomery immediately after the disaster, Major Ralph Ingersoll found that the ten Bigot officers were missing, like 600 other soldiers. However, it is not impossible that certain shipwrecked men were gathered by the German stars. This would mean that the Germans might be in possession of the plans for Operation Overlord, which would probably be enough to cancel everything.

Eisenhower gives the order that all the bodies are imperatively found. If 250 soldiers are still missing after the search, the bodies of the ten officers concerned are found, they have not fallen into the hands of the Germans: the secret of D-Day is preserved.

This incident, however, allows the Allies to draw a number of important lessons for D-Day: the importance of the synchronization of the radio facilities between the Americans and the British and as a rule a deepening of the joint and combined work, Use of lifejackets for foot soldiers and the setting up of rescue procedures at sea.

It was not until 1984 that the American staff opened the archives on the events that occurred on April 27 and 28, 1944, a few weeks before the landing in Slapton Sands Bay.

Back to the Preliminary operations menu