Churchill Bobbins tank – Hobbart’s funnies during the battle of Normandy 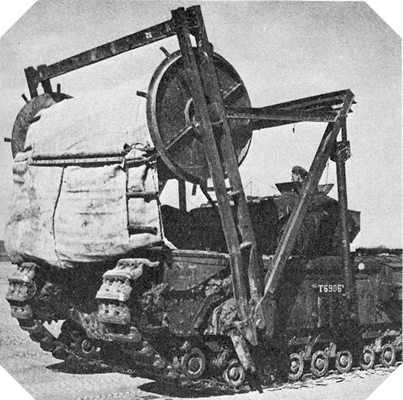 The chassis of the British Churchill tank, as well as that of the American Sherman, serves as the basic structure for many other versions (flamethrowers, anti-mines, bridges …) used by the British forces during the Normandy landings and better known as “funnies“. These engines, devised by the English general Percy Hobart, must improve the capabilities of crossing and support fire to the benefit of Allied land forces.

In 1942, the Allies prepared for the landing of Dieppe (Operation Jubilee) and faced a first problem: the beach of Dieppe is covered with pebbles, consequently the infantry and the vehicles are not able to evolve easily.

The version of the Churchill Bobbins (assi called Carpet Layer) is one of the solutions to the problem, because it corresponds to the model designated for the “crossing”. Indeed, the tank is equipped with a coil (hence the name “Bobbins”) which deploys at the front of the machine a carpet in cloth on which the infantry and the vehicles can evolve more easily and therefore more quickly.

This deployed rug can also mark a road cleared by demining tanks (notably the Crab) and indicate the right way to go.

Specialty: Installation of a “carpet” on the ground facilitating the progression of light vehicles and infantry