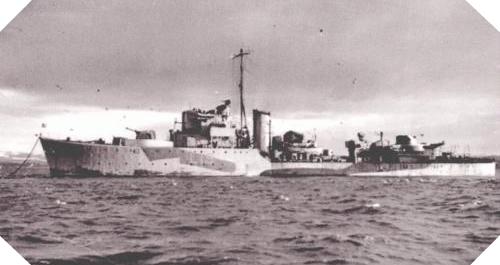 La Combattante is a Hunt Type III destroyer initially dubbed HMS Haldon by the Great Britain and offered to the Free French Naval Forces (FNFL) in 1942. Attached to the 1st British Destroyers Squadron, this warship is ordered during the Battle of Normandy by Lieutenant-Commander Patou.

Deployed in the naval J force on 6 June 1944, it operated ahead of Courseulles-sur-Mer and bombed the German forces in this area, destroying in particular a 88 mm German gun camouflaged in a house and firing nearly 400 102mm shells during this single day. Having got too close to the shore, it grabbed the ground and received a message from an English ship nearby, sprinkled with typical British humor: “Am satisfied that it is a Frenchman that touches France’s soil first “.

On June 14, 1944, the La Combattante warship transported French General de Gaulle, who landed at Courseulles-sur-Mer. It was then engaged to escort convoys in the North Sea.

On February 23, 1945, the La Combattante was half-lengthed by an underwater mine off the east coast of England and dark: 67 sailors lost their lives as a result of this tragedy.