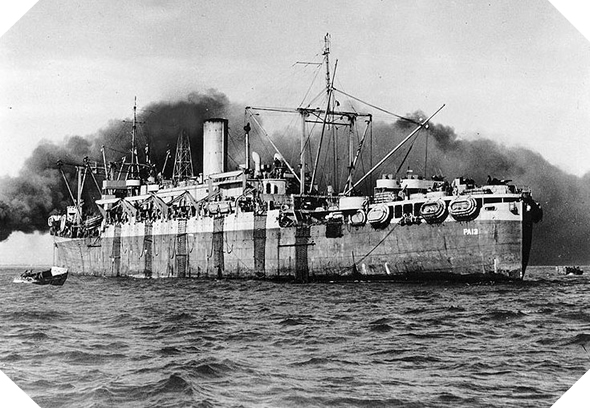 USS Joseph T. Dickman was launched on 6 July 1921 and entered service in January 1922 with the name of Baptism Peninsula States. It made transatlantic crossings to the United States Lines Company and was renamed President Roosevelt in August 1922. Subsequent to the US Navy in October 1940, it was named USS Joseph T. Dickman and transformed into an attacking carrier 10 June 1941. It then carried out a series of landing exercises and then transports troops to the Indian Ocean or the Caribbean.

In November 1942, it  took part in Operation Torch off Morocco and then in Operation Husky in Sicily in July 1943. On November 30, 1943, it made its way to Scotland to prepare for the assault on the fortress Europe.

On D-Day, the transporter is commanded by Captain Raymond J. Mauerman. Incorporated in the Green Assault Group 125.4 of Commander Audley L. Warburton, it landed its personnel safely on Utah Beach and returned to England on the afternoon of June 6, 1944, evacuating wounded on board. Back in Normandy on June 14 to transport new reinforcements, it left the Channel to join the Mediterranean Sea.

Joseph T. Dickman then took part in Operation Dragoon in Provence before heading to the United States on October 25, 1944. Engaged in the Pacific from January 24, 1945, it participated in the Battle of Okinawa in March And is deployed in the Philippines in August.

Loading of a Jeep aboard a LCM from the USS Joseph T. Dickman in June 1944 (Photo: US National Archives)