August 17, 2022. More than two years after the announcement made in January 2020 of a new commercial project inspired by the theme of the Battle of Normandy and finally entitled “Tribute to the Heroes”, a public consultation opens from August to October 2022 to better define the contours of this theme park. This is an opportunity for all the supporters and detractors of this project to contribute to the debate. 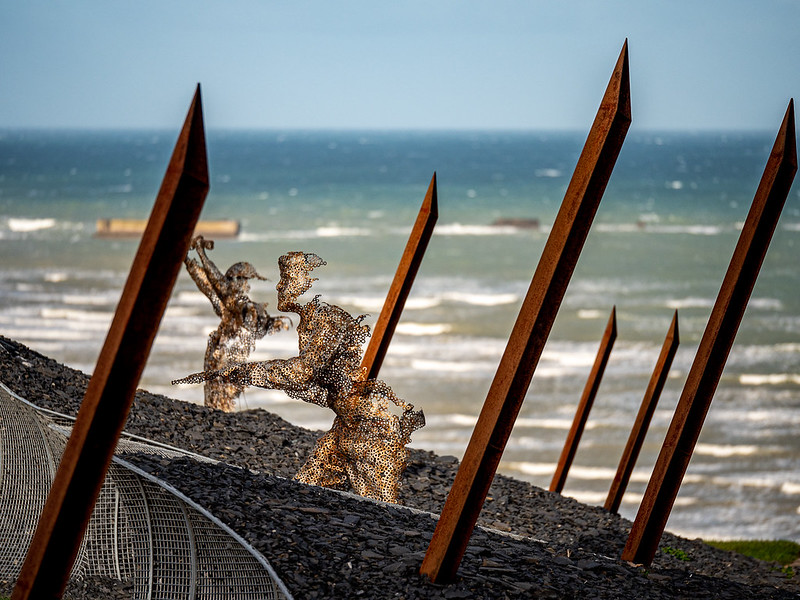 The origins of the debate: a chaotic presentation

On the occasion of the traditional greetings to the press in January 2020, Hervé Morin, president of the Normandy administrative region, announced a project for a grandiose show on the theme of the D-Day landing, directed by a renowned director, with the objective of being presented on the occasion of the 80th anniversary of the “D-Day”, in 2024. In his own words, “we were missing an event that would allow us to retain for one or two days more the numerous visitors who come to the D-Day beaches”. The implication was obvious: tourists were not spending enough in Normandy and it was urgent to find a solution. This was all it took to trigger an outcry against this mysterious project: this clumsy presentation, which was more concerned with its commercial purpose than its historical content, immediately came up against numerous questions that remained unanswered for a long time.

Remembrance tourism in Normandy is, however, a shifting terrain that requires particular caution: in addition to the traditional “parochial wars” through which enthusiasts, historians, associations or even local elected officials sometimes engage, appropriating history to serve purposes far removed from the principles and ideals declaimed during the commemorations, remembrance tourism has experienced bitter failures in the past, following the example of the 2013 attempt to unite some of the tourist offices of Basse-Normandie within the framework of the aborted project “Mythical Sector of the D-Day Beaches”.

Shortly after the declaration of the president of the Normandy region, several groups opposing the project emerged. Dubbing this future site “D-Day Land” or “Disneyland 44”, they quickly obtained the support of elected officials, journalists, historians, but also and especially veterans and their families. The most striking example being that of the last two D-Day French veterans of the Kieffer commando still alive at that time, Hubert Faure and Léon Gautier, who in July 2020 protested against this initiative, denouncing: “How can we make a ‘DisneyLand’ on the death of people who gave their lives for France?”
A few weeks later, on September 5, the writer Gilles Perrault, who lives in Saint-Marie-du-Mont, in turn denounced the project in Le Monde, describing “a historical masquerade with a commercial purpose (…) calling on 150 comedians and circus performers, with the reconstruction of a village” that “will ensure the sale of local products and derivatives.” On September 9, a new blow against the project: 154 descendants of the Kieffer commando signed a tribune “the transmission of the memory (…) cannot, in any case, be done on a spectacular, festive and commercial way“.

The polemic is lively and reaches abroad. On May 27, 2022, families of American, Canadian and British veterans wrote a communiqué condemning the fact that the soldiers killed were “reduced to the role of extras in a show“. For these signatories, “the transmission of memory is here only a pretext for the development of a business far removed from the dramas still very present in our personal and family histories“. A project whose contours are gradually taking shape

The show initially struggled to find support, due to a communication lacking in details that gave the impression that the project had been presented before it was fully developed. It is through this flaw that detractors legitimately slipped through.

Over the months, announcements have been made to clarify the content and historical objectives. This new center was presented as being open six months a year, able to accommodate 6,000 people a day, and located in the Saint-Hilaire-Petitville area (Carentan-les-Marais), in the immediate vicinity of the current Normandy Victory Museum. The show, installed in a 1,000-seat theater that moves more than 400 meters, should be signed Serge Denoncourt and Stéphane Roy, who created “Je vais t’aimer” (I’m going to love you) based on songs by Michel Sardou in 2021. The spectator will see about thirty “living tableaux” allowing him to embark in New York, to find himself in the English training camps, to disembark before being in the heart of the fighting. The entrance fee would be 28.50 Euros per person.

The support of various personalities is gradually strengthening this “Tribute to the Heroes”, a name that is intended to cut short the “D-Day Land” name that sticks to it. The organization “Tribute to the Heroes”, is surrounded by the American veteran Charles Norman Shay, who sees in this show the opportunity to tell the story of the Battle of Normandy to a wide audience, as well as Tristan Lecoq, General Inspector of the French National Education. Jean Quellien, a leading academic on the Battle of Normandy, also confirmed that he was a member of the scientific council in charge of ensuring the historical conformity of the subjects addressed. 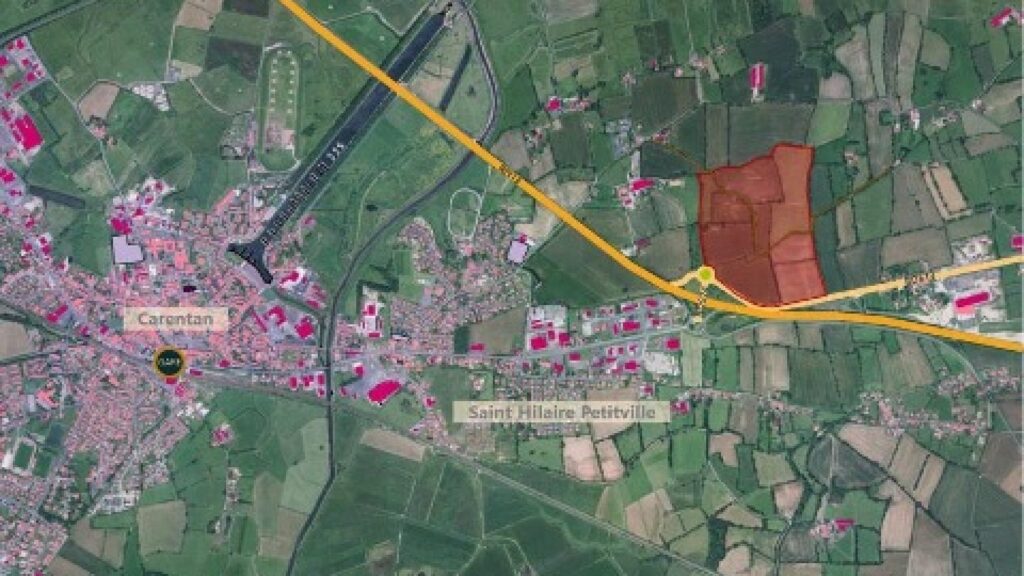 This is a major economic opportunity for the Carentan-les-Marais area, likely to create between 200 and 250 jobs, with an investment of nearly 110 million Euros from private funds. The economic spin-offs are potentially very high for the city of Carentan as well as the department, as anticipated and hoped for by Philippe Gosselin, MP for the Manche administrative area.

In the end, three committees are gathered within the association “Hommage aux Héros” (French non-profit 1901 law): they are respectively interested in ethics and memory, the scientific and educational approach, as well as economic and local issues. The public consultation is a response to the referral on March 22, 2022 of the Commission nationale du débat public (CNDP, National Commission for Public Debate) by the project owner of the site. The role of the CNDP is to ensure that the right to information and public participation in the development of projects with an impact on the environment is respected. This consultation also follows the open letter to the Minister of Ecological Transition, sent on October 15, 2021 by the critics of the show. The latter consider that “about thirty hectares of farmland should be reclassified as a zone for urbanization, which is in total contradiction with the Climate Law and with the contract of recovery and ecological transition (…) between the State and the Community of Communes of the Cotentin Bay“.

The project owner also assures us that the study on the environmental impacts has been carried out with the utmost seriousness, resulting in “frugal” design guidelines, particularly in terms of energy and technology.

The CNDP has appointed Laurent Demolins, former commander of the Calvados gendarmerie group between 1998 and 2001, to ensure that the project owner provides appropriate answers to the questions raised by the public. Questions may also be addressed directly by the public to the guarantor on the content and methods of the preliminary consultation procedure itself.
At the end of the preliminary consultation and within one month, the guarantor will draw up a report that will be made public. He will summarize the opinions, remarks, questions asked and answers given by the project leader during the consultation and will make recommendations for the continuation of the consultation until the opening of the public inquiry. 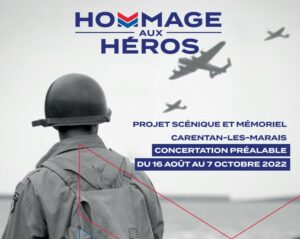 How to participate in the consultation?

This future memorial site now faces several major ethical problems, starting with the disagreement of veterans of the Battle of Normandy and their families. The question of maintaining the realization of this show in spite of their opposition is all the more delicate as the whole of the last actors and direct witnesses of this historical event is not unanimous on the question. Some of the detractors have nevertheless been involved for several decades in the promotion of remembrance tourism, following the example of Léon Gautier, who is responsible for numerous visits and visits to the Commando No.4 museum in Ouistreham. If his opinion on the subject was indeed solicited by the ethics committee (without him being part of it, contrary to what had been put forward by the Comité du Débarquement in 2020), it was not however retained since he did not support the project.

What about the last physical remains of the Battle of Normandy, such as the artificial harbor of Arromanches or the bunkers of the Pointe du Hoc, some of which are condemned to disappear by 2050 in the face of climatic hazards if nothing is done to save them? Several tens of millions of Euros, from both private and public funds, are needed to prevent or at least slow down this phenomenon which affects two of the most visited sites for remembrance tourism in Normandy. How can we ethically justify investing these funds in a new memorial site rather than in the preservation of direct witnesses to the Battle of Normandy?

This initiative also demonstrates the evolution of the way new generations look at the treatment of history. The setting and techniques of this show, which contrast with the means of many museums of the Battle of Normandy, aim to attract new generations with a dynamism and an immersion that is still rare. Some memorial spaces have nevertheless taken the step like the D-Day Experience or the Airborne Museum, which brilliantly use new technologies to present the facts of June 6th 1944.

If we should not fear novelty but on the contrary hope that it can contribute to attracting new generations to history, we should also be pleased that the history of the D-Day landings and the 1944 Normandy campaign continues to attract investors and new projects. What would we say if remembrance tourism in Normandy had disappeared?

However, it is imperative to resolve the ethical problems posed by this future museum before it takes shape. It is also necessary and urgent to worry about the gradual disappearance of several museums that have recently closed their doors, such as the Normandy Tank Museum (which auctioned off most of its collection in 2016, denouncing a fiscal inequity and the lack of local support) or the Grandcamp-Maisy Ranger Museum. These places of memory, where unique collections delivering exceptional testimonies are gathered, must be further supported by the State and local authorities in order to maintain and support the evolution of the transmission of memory