Villers-Bocage in 1944 – Calvados – Battle of Normandy

As early as June 12, 1944, the British 2nd Army tried to exploit the breakthrough of the front by the Americans in the area of ​​Caumont-l’Eventé where the 352. Infanterie-Division, in action since D-Day, can no longer hold. For the British, who are looking to find a solution to achieve the objectives of Operation Perch, it is a perfect opportunity to get around Caen by the west in order to capture it while trapping the Panzer-Lehr-Division. The study of the ground makes it possible to note that to accelerate the progression, an overflow in the sector of Villers-Bocage is preferable because of the rugged nature of the different compartments of land more to the west. Moreover, high points in the vicinity of Villers-Bocage (and in particular Hill 213 to the north-west) make it possible to ensure a good observation of the region, which benefits for the moment for the Germans. The latter, conscious of the weakness of their line in this sector of operations, immediately sought to strengthen their positions: on the night of 12 to 13 June, two companies of heavy tanks of SS-Panzer-Abteilug 101 armed with Tiger I Type E are installed at the level of Villers-Bocage and secure the national road 175 (RN 175). They are commissioned by Hauptsturmführer Karl Möbius (1. Kompanie) and Obersturmführer Michael Wittmann (2. Kompanie).

On June 13, 1944, at 7 am, the 4th County of London Yeomanry squadron (belonging to the 22nd Armored Brigade of the British 7th Armored Division) reached Villers-Bocage without any problems from the west. A semi-tracked German SdKfz 251 is detected near the village but it can not be engaged. Once in the village, the English armored vehicles were followed by company A of the 1st Battalion Rifle Brigade (22nd Armored Brigade) and two soldiers in a Kübelwagen vehicle were spotted as they folded at high speed, while Several unidentified reconnaissance vehicles are engaged during the advance of the 22nd Armored Brigade. The English then prepare to move towards the RN 175 to continue in the direction of Caen.

Meanwhile, the 2nd squadron commanded by Wittmann, who camouflaged his tanks in the vegetation south of Hill 213, observed the regiment and its 60 tanks (in addition to about sixty armored vehicles) maneuvering in Villers-Bocage. Not expecting to be in contact with the opponent so quickly, he is obliged to think about his maneuver as soon as possible. At 8 o’clock, the first elements of Squadron A of the 4th County of London Yeomanry reached the vicinity of  Hill 213 without prior acknowledgment. A Kübelwagen is detected and destroyed on the road while the tanks are placed in turret scroll to ensure the observation of the area. The British want to secure the area around Hill 213 to support the crossing of the 22nd Armored Brigade. Foot soldiers are stationed on both sides of the road but the vegetation prevents them from seeing beyond 250 meters.

At 9:00 am Sergeant O’Connor, belonging to the 1st section of company A of the 1st Rifle Brigade, progressed on the road at level 213 aboard his half-track when he discovered Wittmann’s Tiger tank. He screams on the radio: “Good God, we have to get out of here! There is a Tiger tank that is progressing about fifty meters from us!” The effect of surprise works perfectly: Wittmann takes advantage of this moment of floating during which the regiment reorganizes its device to attack at very short distance with its six armored vehicles. His Tiger progresses behind Squadron A of the 4th County of London Yeomanry and engages a Cromwell tank which is immediately destroyed. A Firefly tank is put out of action and catches fire in the middle of the road, while three more English tanks are destroyed within minutes. The Germans encircle the English tank squadron which is gradually put out of action. Wittmann then proceeds along the road accompanied by three other Tigers (commanded by Hantusch, Sowa and Stief) and they climb up the column of opposing vehicles between Hill 213 and the entrance to the village, sowing terror and destruction. The British began to retreat into disorder through Villers-Bocage in a westerly direction, while several infantrymen of company A of the 1st Battalion Rifle Brigade tried to use PIAT rocket launchers and put a battery anti-tank gun 6 Pounder: when the Tigers approach them, the English abandon their position and fold back. As his car was overheated, Wittmann decided to embark in the Tiger ordered by Sowa (registered 222) and headed for the center of Villers-Bocage.

Going up the column of the 4th County of London Yeomanry, the Germans then attack the elements of the staff of the regiment who maneuver better or worse to escape the monsters of steel that melt on them. A Sherman and a Cromwell used by the artillerymen of the 5th Royal Horse Artillery and transformed into observation posts, were destroyed by direct fire from the Wittmann tank, which took its place alone in the rue George Clemenceau in Villers-Bocage. Wittmann reached the Place Jeanne d’Arc and immediately began a duel with a Sherman Firefly tank: a Tiger shell hit a house near a Cromwell tank and the ruins partially covered it; In the explosion, a German sniper who had concealed himself in the building finds death. Wittmann receives a direct hit from the Firefly which temporarily damages his sighting system but the Tiger manages to destroy the English tank. Captain Pat Dyas, Adjutant of the 4th County of London Yeomanry, has to abandon his destroyed Cromwell but is killed by a German soldier stationed in a house along the main street. Wittmann made the decision to retreat and crossed Clemenceau Street in the direction of Hill 213. Shortly after 9:30 am, Sergeant Bray engaged the Tiger with his 6 Pounder anti-tank gun east of Villers-Bocage, Junction between the road of Caen and the departmental road 6 (directed towards the north in the direction of Villy-Bocage), and manages to stop it. Michael Wittmann decides to abandon his tank and continue on foot towards the castle of Orbois, six kilometers to the north, where the Panzer-Lehr-Division headquarters is located.

Later that morning, Major Werncke of the Panzer-Lehr-Division made a reconnaissance of the Villers-Bocage area and discovered a column of unmanned Cromwell tanks. The latter are gathered at the head of the device, receiving instructions from the leader of the platoon. Werncke manages to get into one of the tanks, leads him and leaves the position before the English can react, heading for the castle of Orbois. In Villers-Bocage, the 22nd Armored Brigade reorganized and prepared its line of defense while waiting for reinforcements. Shortly after 10 o’clock, the 4th squadron of the Schwere SS-Panzer-Abteilug 101 commanded by the Hauptsturmführer Rabe reached the area and immediately engaged in combat in the vicinity of the village, attacking isolated English units on Hill 213. The 1/7th Battalion, Queen’s Royal Regiment of the 131st (Queens) Brigade (7th Armored Division) enters Villers-Bocage and comes to reinforce the English defensive device, making several German prisoners of the 2. Panzer-Division. They fought a tough fight from house to house to push the Germans out of the village. The tanks are hidden between the buildings, able to unclog in the streets to take on possible enemy tanks. Despite this reinforcement, the situation for the 4th County of London Yeomanry commanded by Lieutenant-Colonel Arthur, Viscount Cranleigh, is more than precarious; At 10.30 am, he reported that his encircled and isolated units on the Hill 213 hill could not fall back. The Germans bombarded the movement of the ground and the English soldiers there decide to visit a few moments later: 30 soldiers are taken prisoner.

Generazutnant Fritz Bayerlein, commander of the Panzer-Lehr-Division, moved to Villy-Bocage where he ordered the Hauptmann Helmut Ritgen of the 2nd Battalion of the Panzer-Lehr-Regiment 130 to seize Villers- Bocage with 15 Panzer IV. It is reinforced by the 1st squadron of the schwere SS-Panzer-Abteilug 101 which is commanded by the Hauptsturmführer Karl Möbius. At 1 pm, the English detected these tanks as they approached the village and opened fire with their anti-tank guns; They succeeded in destroying one tank in the north and two others in the south. Wittmann manages to rejoin his tanks at level 213 at the same time and reorganizes his squadron before returning to battle. Villers-Bocage is completely encircled by the Germans. The first Tiger tanks are ambushed and are engaged at short range, notably by a Sherman Firefly commanded by Sergeant Bramall and an anti-tank gun that destroyed the first tank. The next three Tigers separated to attack the English positions in reverse, but one of them was destroyed by an anti-tank gun, the other two were immobilized by the infantry using the PIAT. Bramall detects a fifth armored vehicle, standing motionless in front of Place Jeanne d’Arc; He decides to hire him with his Firefly by pulling through the window of a house. The cannon of the Tiger is touched and this one folds back immediately. But the Cromwell tank of the Corporal Horne barred the way: he hired the German tank and destroyed it by a shell placed in the back of the tank. Meanwhile, the English set fire to the wrecks of German tanks, fearing that the enemy could repair its tanks in case of capture of the village.

The Panzer-Division infantrymen launched a violent attack from the south, which was accompanied by mortar fire on the village. Company A of the 1/7th Battalion, Queen’s Royal Regiment is hit hard and one of its sections is captured by the opponent. The tanks of Company B of the 4th County of London Yeomanry intervened to prevent them from seizing Villers-Bocage, inflicting heavy losses on the Germans. However, they manage to fix the staff of the 1/7th Battalion, Queen’s Royal Regiment and the English take the decision to evacuate the village. Initially, the infantry left the scene, supported by tanks and smoke bombs fired by the 5th Royal Horse Artillery. The American artillery of the V Corps also supports the British retreat to the village of Tracey-Bocage, two kilometers west of Villers-Bocage. The English fought in this village until 10:30 pm and the German offensives gradually ceased.

During the first day of combat for the liberation of Villers-Bocage, the 22nd Armored Brigade recorded the loss of 217 men (killed, wounded, missing or taken prisoner), 27 tanks (20 Cromwell, 4 Firefly, 3 Stuart) and 30 armored transport vehicles (14 half-track, 14 Carrier and 2 observation Sherman). The corps commander of the 4th County of London Yeomanry, William Arthur Bampfylde Onslow (also known as Viscount Cranleigh), is taken prisoner by the opponent. On the German side, the 1st squadron of the SS-Panzer-Abteilug 101 loses 9 killed and 10 wounded while the 2nd squadron of Wittmann has one dead and three wounded; 6 Tiger and 2 Panzer IV are destroyed. 9 French civilians also died in the village (3 during the fighting and 6 during the bombing).

On June 14, 1944, the 22nd Armored Brigade retreated three kilometers west of Villers-Bocage where it established a perimeter of security. Since this position (called since “Brigade Box”), the British have views on the Villers-Bocage area and can thus control the movements in the area without however keeping this village. From June 14 to 15, 337 Royal Air Force bombers (223 Lancaster, 100 Halifax and 14 Mosquito) bombed the area: one SS-Panzer-Abteilug 101 schwere Tiger was destroyed while three were damaged. On 30 June 1944 at 8.30 pm, a new bombardment took place on Villers-Bocage in support of Operation Epsom. The Royal Air Force has dropped 1,100 tons of bombs from 266 bombers (151 Lancaster, 105 Halifax and 10 Mosquito).

A month later, on July 30, the British launched Operation Bluecoat, which aims to fix the German forces in the area of ​​Caen while the Americans pierce the front to the south of the Cotentin. On August 4, 1944, almost at the end of the operation, the British 1st Battalion Dorsetshire Regiment (231st Infantry Brigade, 50th Infantry Division) liberated the town of Villers-Bocage, which was reduced to ashes. 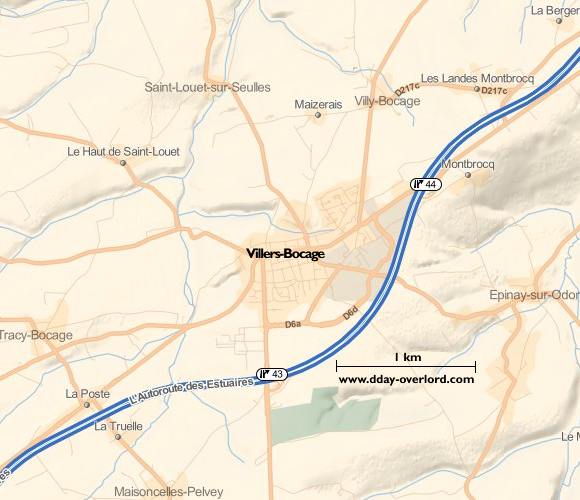