Crusader AA Mk III during the battle of Normandy in 1944 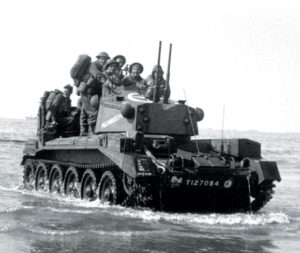 The arrival of the Sherman tank in the year 1942 in the Allied armies rings the death knell of the Crusader tank, yet widely used by British armies at the beginning of the Second World War, especially in North Africa. Removed from the front lines, its hull still remains useful to the Allies: military engineers are given the mission to turn some of the Crusader into an antiaircraft vehicle.

The armor turret is modified and the main armament of the Crusader Mk III (a QF 6 Pounder – 57 mm) is replaced. Several versions are thus produced, which differ according to the on-board armament or the positioning of the radio set. Thus, the Mk I version includes a 40 mm Bofors gun. The Mk II and Mk III versions have two 20mm Oerlikon twin guns and a .303 (7.7mm) Vickers K machine gun.
The aim of this tracked armored vehicle is to support the combat units at the rhythm of the mechanized units and/or to settle near a key point of the ground in order to fight against the enemy aircraft, in particular the fighters at low altitude.

The Crusader AA Mk III (AA meaning “anti-aircraft”) was used by British armored units during the Battle of Normandy, as well as by the 1st Polish Armored Division. The air assets of the Luftwaffe (German air force) not being massively engaged, the role of these tracked vehicles was not decisive in Normandy. In August 1944, however, Polish forces engaged in the Falaise area used Crusader AA weaponry in horizontal terrain to destroy land units.