The Franco-American ceremony of June 6, 2019

The Franco-American ceremony of the 75th anniversary of D-Day

Heads of State and Government at the Colleville-sur-Mer American Military Cemetery on the occasion of the 65th Anniversary of the Normandy Landing, June 6, 2019.
Photo: DR

The information published on the website of the Isigny-Omaha Beach tourist office announces that the Franco-American binational ceremony will take place on June 6, 2019 at 11 am at the American military cemetery. This publication, whose source would be the town hall of Colleville-sur-Mer, said the ceremony is organized in the presence of the two presidents: Donald Trump and Emmanuel Macron.

Neither the town hall of Colleville-sur-Mer, nor the Visitor Information Center of the American military cemetery have confirmed this information so far. Details regarding the awarding of invitations, accreditations and passes are not yet known. For more information: dday75@abmc.gov.

A few weeks before the anniversary date of D-Day, no information has filtered about the possible organization of an international ceremony. Only binational ceremonies are currently planned or still to be confirmed: French-Canadian in Courseulles-sur-Mer, Franco-English in Ver-sur-Mer, Franco-Danish in Utah Beach and … Franco-American in Colleville-sur-mer?

On March 23, 2019, according to French newspaper “Le Parisien“, a source close to the region confirmed the participation of US President Donald Trump in the commemorations, without further comment on the consequences for passes, dates, schedules or temporary closures of the axes.

On April 11, 2019, the US President himself confirmed his participation in the media. 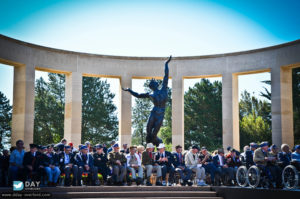 June 6, 2014: Allied veterans at the American military cemetery of Colleville-sur-Mer on the occasion of the Franco-American ceremony of the 70th anniversary of the Normandy landings.
Photo: D-Day Overlord