The history of the Rangers in Normandy revisited by Hollywood 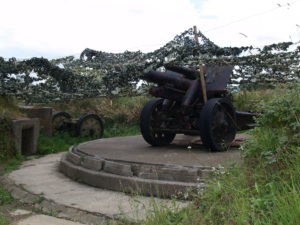 15 cm sFH18 howitzer installed on a battery in Maisy, coded Stp 83 by the Germans. This place will be used for the filming of the American series “Legendary Locations” which focuses on the history of the Rangers in Normandy. Photo: D-Day Overlord

September 25, 2018: The history of the Rangers in Normandy revisited by Hollywood
Author: Marc Laurenceau

The film The Longest Day, which largely participated in popularizing the Normandy landings, illustrated the breathtaking assault on the Pointe du Hoc battery on June 6, 1944 by the Americans of the 2nd Ranger Battalion commanded by Lieutenant Colonel James E. Rudder. The images of these commandos, the famous Rangers, climbing the cliffs 30 meters and discovering with stupor a battery without guns, have forged the collective memory of D-Day. 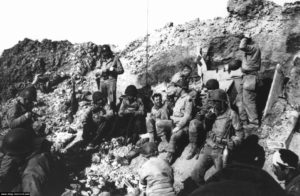 US Rangers of the 2nd Ranger Battalion enjoy a moment of respite after hard fighting at Pointe du Hoc. Two parachutists from the I / 506th Parachute Infantry Regiment (101st Airborne Division) took part in the fighting: Ray Crouch and Len Goodgall. Parachuted by mistake in the sector, they reinforced the Rangers before joining their unit after June 8, 1944. Len Goodgall and his division badge are visible in this photo, under the flag with the red cross. An English commando, liaison officer Thomas Trevor, can also be seen in the lower right, with a white band on his face.

Today, historical narratives are becoming more refined. The rediscovery of the site of the Maisy battery in the eyes of the general public in January 2006 had already sounded like a thunderclap in Normandy, causing heated debates in the world of historians. Beyond the site itself, forgotten history books and tours, it was the battle that took place there June 9, 1944 that had been purely and simply ousted historical creations.

However, the sites of Maisy and Pointe du Hoc have one thing in common: they have both been stormed by the Rangers, with fights of a rare intensity, a few days apart. More importantly, these two successive assaults are linked by a single order of operation.
It is this historical reality that an American historical series, called “Legendary Locations”, wants to correct. Based on the books of Gary Sterne (owner of the battery of Maisy) Cover-Up at Omaha Beach: D-Day, The US Rangers, and the Untold Story of Maisy Battery, published in 2016, but also on the Cover Up at Pointe du Hoc: The History of the 2nd & 5th US Army Rangers 1943 – 10th June 1944 (to be published in 2019), the director of this show wants to trace the commitment of American commandos from June 6 to 10, 1944 between Omaha Beach, Pointe du Hoc and Maisy’s battery. The filming takes place in October 2018 on the site of the Maisy battery and the show should be broadcast the following month in the United States. The filmmakers are also looking for extras in period dress (Rangers and Wehrmacht), who must have the complete uniform as well as weapons and equipment (to volunteer, send contact details and at least one photo by email at truebrit61@icloud.com). 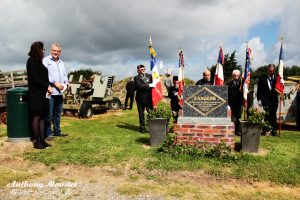 Ceremony at the Maisy battery on June 9, 2017 on the occasion of the 73rd anniversary of the assault on the German fortified point by the 5th Ranger Battalion.
Photo: D-Day Overlord Association

Two main historical points raised by these studies are indeed new and upset the received ideas. According to Gary Sterne, based on plans made by the US intelligence services in May 1944, a few days before D-Day (which specifically detail that these artillery pieces had been removed further south), the Rangers could not not ignore that the guns of Pointe du Hoc had been moved. But this information, having been communicated too late to the staff of General Eisenhower, could not modify the plans of attacks as initially imagined.

The second point concerns the Rangers’ plan of operation, whose grouping was at that time under the command of the 1st (US) Infantry Division. The men of the 2nd and 5th Ranger Battalions were thus to seize the Pointe du Hoc, then in the wake of the battery of Maisy, the latter being considered in the end as potentially more dangerous. The unforeseen of the assault of June 6 having considerably undermined the initial plans, the assault of the guns of Maisy could not be realized that June 9, 1944, in painful conditions.

The story is never definitively written, as the result of long years of research proves. 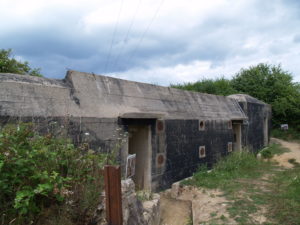