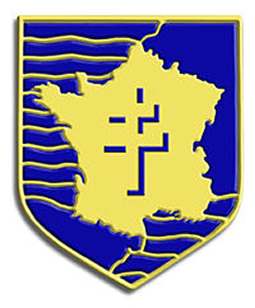 Origins of the 2nd Armored Division

Men from the 2nd French Armored Division came from the Leclerc column (1941) and from the February 1943 “L Force” (L as Leclerc) subordinated to the 8th British Army. In March 1943, these men were attached to Captain Rémy’s column before forming the 2nd Free French Division (“2ème division de la France Libre“, DFL) composed of French units in Africa that had gathered at Sabratha in Libya on May 15, 1943. The 2nd Armored Division was officially created on August 24, 1943 in Temara, Morocco. It was commanded by General Philippe Leclerc.

The Allies want to involve this unit, hardened by the hard fighting of North Africa, to the invasion of Normandy. They also wish to give free French forces the opportunity to participate in the liberation of their country. Transported in England from April to May 1944, the 2nd Armored Division is fully equipped with American equipment and continues its training.

The second armored division, nicknamed “2e DB“, landed at Saint-Martin-de-Varreville (Utah Beach) on August 1, 1944 and regroups in La-Haye-du-Puits in the Cotentin Peninsula. Composed of 14,000 men including 3,350 colonial troops, it is placed under American command, under the orders of the 3rd Army of General George S. Patton and the 15th Army Corps of General Haislip.

The 2nd French Armored Division participates in operation Cobra and the closure of the Falaise pocket. French troops advance towards Avranches, Vitré, Château-Gontier and Le Mans. They liberate Alençon August 12, 1944 and take the Germans speed. But the Allies are slow to close the trap set for the Germans at Falaise, particularly because of the coordination difficulties between units moving northwards and those progressing southwards.

While they are at the gates of Argentan, Leclerc’s soldiers are ordered to advance towards Paris to conduct reconnaissance missions. After the requests supported by General de Gaulle and Leclerc, the Allies allow the 2nd French Armored Division to enter the French capital where it faces multiple skirmishes. After the uprising of the Parisians which accelerates the departure the Germans, Philippe Leclerc receives the surrender of the general Dietrich von Choltitz in person on August 25, 1944.

From Paris to Strasbourg

French troops arrive in Alsace just before the beginning of winter. In difficult fights are added the roughness of a particularly bad weather. After the liberation of Obernai, the 2nd French Armored Division carried out on 23 November 1944 the oath of Kouffra pronounced by Leclerc: the Alsatians welcome their liberators with immense joy. The United States decorate the division of the prestigious Presidential Unit Citation following the fighting for the liberation of Strasbourg.

Leclerc continues his offensive in Germany and Austria while the fighting continues in the pocket of Colmar. Soldiers of the French 2nd Armored Division are the first to enter Hitler’s Eagle’s Nest, even before American paratroopers of the 101st Airborne Division.

In the aftermath of the war, the 2nd Armored Division was disbanded on March 31, 1946. Recreated thereafter, it is reorganized into a brigade which now bears the name of 2nd Armored Brigade (“2ème brigade blindée“). Its staff moved to Orléans in 1999 (Camp Bellecombe) and then to Illkirch-Graffenstaden in 2010 (Camp Leclerc).

Its regiments have been deployed regularly since the Second World War, including Kosovo, Côte d’Ivoire, Afghanistan and Mali.